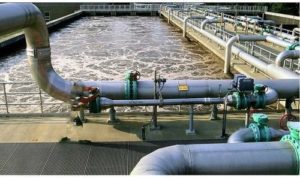 Why Ozone for Sewage water treatment ?

Ozone is one of the most powerful commercially available oxidants and is commonly used for Sewage water and waste water treatment. In addition to its oxidizing capabilites, it is an environmental friendly method of treatment. Pollutants, colored substances, odors and microorganisms are directly destroyed by oxidation, without creating harmful chlorinated by-products or significant residues.

What Ozone does in Sewage water ?

• Removal of organic and inorganic matter

• Removal of micro-pollutants, such as pesticides

•  Oxidatioin of metals and non-metals such as iron, arsenic, manganese, hydrogen sulphide and all organic matter

•  No refilling, replacement or maintenance needed

•  Ozone is effective in a wide pH range

•  Ozone breaks down to oxygen-no by products

The problem of bad-smelling odours emanating from sewer treatment plants is turning out to be one of the most serious problems related to the operation of the same, especially when they are located within a residential environment.

Compounds responsible for odors
• Mercaptans
• Skatoles
• Indoles
• Inorganic acids
• Aldehydes
• Ketones
• Organic compounds containing nitrogen or sulphur atoms (all originate from the anaerobic decomposition of compounds with a greater molecular weight, especially the proteins)
• Among the inorganic compounds, ammonia and sulphuric acid are considered to be the main cause when the sewage comes from mainly household origins because of putrefactive phenomena in reducing environments, leading to generation of H2S and other smelling by-products.

OZONE, with the chemical formula O3, is a highly reactive gas (oxidiser), for which the instability is useful since during the subsequent decomposition process, its oxidising action is exerted on the organic and inorganic substances, bacteria, viruses, spores, etc. It implements additive, ozone analysis and catalytic mechanisms. With regard to bacteria and viruses, it acts through a catalytic oxidation of the proteins, brutally destroying their structures (ANTI-MICROBIC ACTION). For what concerns the organic and inorganic substances, it acts on the groups which bear the odours using an oxidising action due to the atomic oxygen or through the information of unstable compounds (ozonids) which break-up the molecules as they decompose (DEODORISING ACTION). Ozone produces no harmful by-products since all components are either oxidized to carbon- dioxide and water or precipitated out. Main by- product of ozone is oxygen.