HomeEffect Of Ozone on Chlorinated DBPs 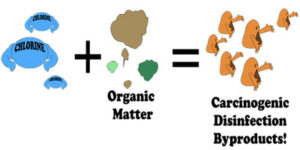 The most common chemical disinfectant in use today is chlorine.It has been known for some time that the process of chlorine disinfection produces large numbers of (mostly chlorinated) by-products, and that some of these by-products are mutagenic and carcinogenic. The fact that chlorination produces chloroform and other THM’s has led to a search for alternative methods of drinking water disinfection, with ozonation being one of the most frequently mentioned choices.

Ozone does not readily react with trihalomethanes (chloroform, dichlorbromethan, chlorodibromomethane, and bromoform), however some losses will result due to volatilization. Other chlorination by-products besides the THM’s may be more susceptible to ozone attack. For example, low doses of ozone can directly reduce instantaneous TOX (total organic halides) concentrations in partially treated water by as much as 50%. TOX is a measurement used to estimate the total quantity of dissolved halogenated organic material.

Typically Trihalomethanes (THM’s) are produced in the treatment process as a result of chlorinination. Only four THM compounds are normally found: chloroform (CHCl3), bromodichloromethane (CHBrCl2), dibromochloromethane (CHBr2Cl), and bromoform (CHBr3). Toxicology studies suggest that chloroform is a potential human carcinogen. It is anticipated that the current THM guideline of 100 ug/L will be revised to a lower value. If the current value were to be set in the range of the World Health Organization (WHO) or that of Germany, 30 and 25 ug/L respectively, it would virtually eliminate the use of chlorination as the main disinfectant for many water supplies. Chlorine could still be used for distribution system protection, provided the chlorine demand was sufficiently reduced by physical and biological means.

Ozone effectively reduces THM precursors at low pH. Generally, however, the pH of surface waters is much lower than 10 and preozonation will effectively reduce the potential for THM formation. At a neutral pH (7) the formation potential of THM’s is slightly reduced by 3-20 % (at the most common ozone dosages). Therefore, ozone when used prior to chlorination can significantly reduce the formation of THM’s upon subsequent chlorination

The concentrations of chloroform precursors are reduced by ozonation. Because THM’s are regulated as a group, finished water instantaneous total THM’s are often reduced as a result of ozonation