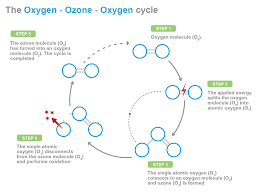 Natural waters contain varying concentrations of numerous organic and inorganic compounds. The main organic constituents in natural water are a collection of polymerized organic acids called humic substances, as well as, carboxylic acids, amino acids, and carbohydrates. The concentration of these compounds is very important in determining the ozone demand because of their specific reactivity with ozone. More importantly, it is these substances which can create taste and odors in water or possibly cause adverse health effects.

The action of ozone on aquatic humic substances at neutral pH primarily leads to:

These reactions as a whole lead to a slight loss of organic carbon and a decrease in the average apparent molecular weight of the humic matter. Simultaneously, ozonation induces a distinct increase in acidity through the carboxylic functions; a formation of trace amounts of some aliphatic acids, aldehydes, alkanes, and other products; and finally the removal of color.

Micro pollutants present in water may include: aromatics and aliphatic hydrocarbons, chlorinated solvents, phenols, substituted or non-substituted polyphenols, pesticides, plasticizers, and surfactants. Micro pollutants generally only make up around 5% of the total organic carbon (TOC) in surface waters.

Ozonation can remove many SOC’s (biocides, hydrocarbons, phenols, plasticizers, dyes, amines, aromatics, pesticides, and solvents). This removal leads to the chemical transformation of these molecules into toxic or non-toxic by-products. It should be noted that these compounds occur at very low concentrations.

Micro pollutants and their reactivity with ozone

Several studies, both pilot and full-scale, have proven the efficiency of ozone as a treatment technology for removal of micropollutants in wastewater. Ozone has excellent disinfection and oxidation qualities which enables degradation of even persistent and non-biodegradable substances. 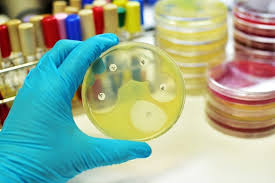 How wastewater treatment with ozone works

Ozone is a known powerful disinfectant and oxidizing agent. Traditionally, ozone has been used in drinking water treatment for disinfection purposes and for removal of color, odor and taste. Recently, the use of ozonation in wastewater treatment is considered in order to remove organic micropollutants that are resistant to biological degradation.

During ozone treatment, the required ozone dose is influenced by the nature and characteristics of the wastewater matrix. High concentration of dissolved organics and other inorganic species may remain after biological treatment, causing an ozone demand in the wastewater. On the other hand, reaction of ozone with dissolved organic matter generates secondary oxidant called hydroxyl (OH) radicals that may contribute to the removal of ozone-refractory micropollutants. Depending on the treatment goal, ozone may be added  after extensive biological treatment or at the end of the treatment train as a polishing step to minimize the ozone dose required. Another factor affecting ozone reaction is the pH of the wastewater. Low pH favors direct reaction with molecular ozone, whereas high pH results in increased ozone decomposition producing OH radicals. The produced OH radicals is seen as an advantage since they react non-selectively with trace organic compounds in the wastewater.

The transformation of organic micropollutants is dependent on its chemical structure particularly on the reactivity of a specific functional group or substituent. Ozone reacts directly with electron-rich sites such as phenols, tertiary amines and carbon to carbon double bonds. On the other hand, those micropollutants exhibiting low ozone reactivity can be effectively removed by hydroxyl radical mechanism. Although complete mineralization cannot be expected, ozone treatment contributes to biodegradability enhancement by transforming organic micropollutants into smaller and simpler molecules that can then be removed by subsequent biological treatment.