Ammonia is oxidized by ozone albeit very slowly, producing nitrate (which can cause methaemoglobomaemia). The oxidation of ammonia is also catalyzed by the presence of bromide. Through a series of reactions involving ammonia species and bromide species additional bromide and nitrate are produced. Ammonia oxidation is slow with ozone especially at pH levels lower than 9.3. The presence of bromide in the water catalyzes the degradation of ammonia. With the help of bromide, ammonia can be oxidized in a neutral pH environment.

Nitrite is also oxidized by ozone at a rate constant of 3.3-3.7 X 10^5 M^-1s^-1. The reaction corresponds to a consumption of 1.04 mg ozone / mg nitrite. The product of this reaction is once again nitrate.

Sulfide competes with other substances for ozone, its tenacity to acquire ozone can substantially increase the ozone requirement a sample. The oxidation into sulfate (S2-  SO32-  SO42- ) corresponds to a consumption of 6 mg ozone / mg S^2-. As with other compounds, the reaction rates decrease with the degree of anion protonization. As species combine with other elements to form more stable combinations (compounds) it becomes more difficult to break their bonds, reducing the rate of sulfate oxidation. Hydrogen Sulfide (H2S) is easily oxidized by Ozone ultimately to form sulfate. 3mgO3/mg H2S to oxidize into sulfate which is a soluble salt.

Phenol products like quinones and polyphenols are susceptible to ozonation. On effective oxidation, phenols can be converted to less toxic carbon dioxide and the phenol content of the effluent can be considerably removed. The reaction follows the following mechanism:- 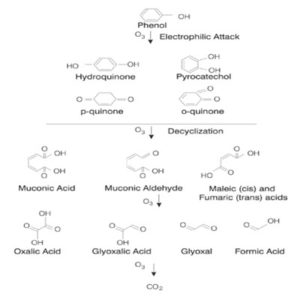 Ozonation is becoming more and more common application for the oxidation of cyanide, particularly in European countries. Free cyanide is Metal finishing industry effectively oxidised by ozonation. This method has also proven to be a successful oxidation process in the treatment of some metal cyanide complexes such as zinc, cadmium, silver, copper and nickel cyanides, but ferri and cobalt cyanide complexes are resistant to ozonation. Ozone oxidises cyanide to cyanate under alkaline condition, as shown by the reaction below:

The oxidation of cyanide to cyanate is a rapid process and completes within 15 minutes at pH values of 9.0 to 10.0. If ozone supply is prolonged to yield an excess dose in the solution, the cyanate can be oxidised to ammonia and bicarbonate (or carbonate depending on solution pH) by the reaction: 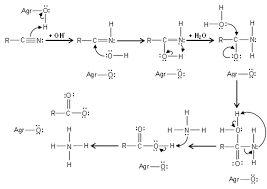 The conversion presented is a slow process and requires the prolonged ozonation application for complete oxidation unless it is accelerated by a homogenous catalyst such as copper, a heterogeneous catalyst such as nickel and cobalt oxides, promoted by ultraviolet (UV) radiation, or combination of UV with H to form hydroxyl (HO·) radicals.

Alternatively, cyanate can be hydrolysed to carbonate and ammonia under highly alkaline conditions and thereafter, ammonia is oxidised to nitrate. These reactions are shown as below;

Some advantages of ozonation for handling wastewaters are that it is stronger than chlorine, it is well suited to automatic control, its on-site generation eliminates chemicals procurement, no dissolved solid contributes to treated effluents, and it oxidises organic compounds to relatively less toxic, short-chain organic acids, ketones, and aldehydes.

Since ozone is supplied as a gas which is bubbled through the wastewater, the oxidation rate is limited by mass transfer of ozone, and temperature. Oxidation rate increases with ozone feeding rate during the cyanide ozonation process and cyanide concentration decreases linearly with time.