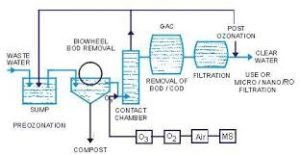 Pre-ozonation in combination with enhanced coagulation was used to remove NOM from lake water as to control the formation of disinfection by-products, DBPs. The effect of the hydrophobicity/hydrophilicity nature of NOM on the performance of the combined pre-ozonation and coagulation process was studied. The hydrophilicity/hydrophobicity property of NOM was characterized in terms of mass distribution of the phydrophilic and the hydrophobilic fractions of NOM. The optimal condition for the combined pre-ozonation–coagulation was established: pH = ca. 9.0 and ozone dose = 0.45 mg-O3/mg-DOC. Under the optimal condition, it was able to achieve ∼ 60% of THMFP removal. In terms of THMPF, results also indicated that the distribution between the hydrophilic and the hydrophobic fractions of NOM was 57.3 and 98.7 µg-THMFP/mg-DOC, respectively. Ozonation alters the structures and characteristics of NOM thereby affecting the coagulation effectiveness. Pre-ozonation was effective in removing the hydrophobic NOM, with a decrease of THMFP by ∼ 20% versus ∼ 10% for the hydrophilic fraction. The dosage of coagulant also governed DOC removal. The removal of hydrophobic and hydrophilic NOM were in the range of 27–41 and 2.5–22.7%, respectively at alum dosage of 0.41–1.65 (in Al/DOC) and 0.41–1.65 (in Al/DOC) and ozone dose of 0.58–2.93, mg/mg respectively. The adsorption characteristics of the hydrophilic and the hydrophobic fractions of NOM on aluminum hydroxide (from coagulant alum) were studied. Results indicated that the modified Langmuir isotherm of competitive adsorption was able to describe the adsorption of NOM onto hydrous aluminum hydroxide formed during alum coagulation of the lake waters.

Many of the dissolved organic compounds are not significantly reduced by conventional treatment (e.g. flocculation, settling, rapid-rate filtration). Biological treatment can remove biodegradable compounds that would otherwise be a food source for bacteria present in the distribution network. The growth of bacteria ultimately leads to the development of higher organisms such as Asellae. Moreover, biological treatment permits lower doses of chlorine to be added in order to maintain free chlorine residual at the end of the distribution network, thus decreasing the risks of THM (Trihalomethane) and odor formation.

In some countries, biological processes have not been extensively used due to a perception that encouragement of bacterial growth contradicts the principal objective of water treatment, which is to eliminate human pathogenic organisms. However bacterial populations on granular media can use a wide variety of organic compounds.

Biodegradable or assimilable organic carbon is defined as either (1) the fraction of dissolved organic carbon (DOC) that can be used by the bacteria for growth and cell maintenance or (2) the degree to which microbial growth is stimulated by the DOC. Numerous authors have shown evidence of the increase in the biodegradability of dissolved natural organic matter following ozonation.

Certain molecules are either resistant to the action of ozone or are transformed into products that remain non-biodegradable. However, many natural organic compounds show substantial improvements in biodegradability at doses of 0.5 mg O3/ mg DOC. An increase of 150-650% in the biodegradability index of the wastewater has been observed with preozonation. Ozonation also removes any inherent toxicity to biological media by oxidizing them before the wastewater comes in contact with the biological flora. Also, by converting into oxygen after some time; the dissolved oxygen levels in the biological system increases, thereby increasing the oxygen uptake of the bacteria, improving their metabolism and ultimately increasing the performance of the biological system.

During ozonation some of the biorefactory organics are converted to more biodegradable materials through oxidation. Polar oxygen groupings are added to some of the dissolved organics, and some of the larger dissolved organic molecules are cleaved into smaller oxygenated fragments by the oxidative action of ozone. When these more readily biodegradable organic molecules pass through GAC (Granular Activated Carbon) columns, they encounter natural microorganisms, which develop in GAC macropores within a few weeks of operation only; and thrive in the absence of a residual disinfectant. These microorganisms are capable of rapidly mineralizing the biodegradable organics, converting them to carbon dioxide and water in a few minutes of empty bed contact time.

Although ozone DBP’s are not only readily adsorbed by GAC, they are also easily biodegraded. BAC filtration can effectively remove >90% of the post-ozone aldehydes. After ozone and BAC the finished water aldehyde levels are essentially the same as the raw water levels and are normally less than 10 ug/L. Keto acids are biodegradable with the BAC filter effectively removing 80 to 100% of the post-ozone keto acids.