HomeEffects on Tastes and Odor 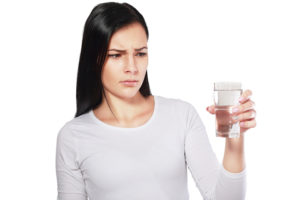 The major organic cause of taste and odor are methyl isoborneol and geosmin, often associated with algal blooms. With so many possible contaminants that could cause a range of issues from harmless to dangerous, it is important to identify the causes of odd tastes or smells in water.

Sulfur odor — Could be caused by sulfate-reducing bacteria or sulfate in the groundwater. It is not necessarily dangerous but could signify high pollution levels.

Sulfate-reducing bacteria are found in oxygen-deficient environments. They product hydrogen sulfide as they feed on decaying matter. Proper ventilation can allow the gas to escape. They can be removed by aeration or chlorination.

Sometimes the rotten egg smell may be caused by a chemical reaction inside a hot water heater. This is the case when the smell is detected when only the hot water tap is used. If present in the water supply, hydrogen sulfide can corrode different types of metal pipes.

Sewage odor — This odor may be caused by bacteria sitting in the drain or when a hot water heater is run at low temperatures or turned off for a period of time. A heavy gas fills the drain near the sink and is forced upward into the air around the sink when the tap is turned on. To determine the source of the smell, users can fill a glass with water, walk away from the faucet, and then smell the glass. If it is odorless, the smell is probably coming from the pipes and drain, so residents should clean the drain or run some water in the drain.

Wet dog odor — This smell likely comes from a hot water pipe or bacteria in a private well. Metal concentration in pipes, environmental contaminants, organisms, bacteria and chemicals are all possible reasons for the odor. The well should be chlorinated.

Salt taste — A salty aftertaste in water could be caused by chloride ions and/or sulfates. Industrial waste or irrigation drainage are common causes of high chloride levels. Chloride is also mostly natural — for example, seawater intrusion or salt deposits. Sulfates such as magnesium sulfate and sodium sulfate can occur naturally in soil and rocks, ending up in the local water supply as groundwater or rainwater move through the earth. Water containing sulfates is usually safe to drink but can damage pipes. A salty taste may also come from road salt.

Sweet taste — A high concentration of calcium or iron, or an imbalance in alkaline or pH levels can cause a sweet aftertaste in water. Pipes can also affect how salty or sweet waster tastes, whether the building is new or old. Plumbing is another potential culprit, so flushing pipes may help to remedy the problem. Iron and other metals can also cause a bitter, metallic taste.

Water filters can help prevent foul tastes or doors, such as point of use filtration systems that connect directly to a building’s water supply and treat water when it is dispensed. Since contaminants can vary based on geography, water specialists should install these systems.

A carbon filter is the most common method of filtration. A 1 micron activated carbon block filter can provide even more filtration. Furthermore, specialists recommend a carbon filter and ultraviolet purification system to prevent bacteria.

Odor and taste of water are closely associated and it is difficult to clearly differentiate between them. Neither parameter assesses the safety of drinking water but both determine its consumer acceptability. Ozone can solve taste and odor problems. Inorganic compounds such as iron, copper, and zinc can be tasted in distilled water at concentrations of 0.05, 2.5, and 5 mg/L respectively. However, only iron is likely to be present at such concentrations in potable water. Hydrogen sulfide may also cause characteristic tastes, often described as smelling like rotten eggs. Both reduced sulfur compounds and iron may be eliminated by oxidation with ozone. In the majority of cases, odors are attributable to organic compounds present in very small concentrations. The organisms responsible for creating taste and odor in water are principally actinomycetes and blue-green algae (cyanobacteria). For example, synura (a species of algae) produces unsaturated aldehydes, which are important odor by products, and are readily oxidizable by ozone.